Centre of Health in Holstebro has just been awarded Best Healthcare Building 2018 in Denmark. The center is designed by Arkitema Architects and holds regional, municipal and private health clinics under the same roof. Combined with an outreaching architecture the center is set out to become an important part of the city’s public life.

Recently “Center for Sundhed” (Centre of Health) in Holstebro won the award Denmark’s Best Healthcare Building 2018 by Nohrcon. The award is given annually to a building that sets a good example of interior and exterior design of healthcare buildings in Denmark. In Denmark, local healthcare centers combining several different health functions are on the rise following the country’s centralization of “super hospitals” in the larger cities.

Holstebro is a middle-sized city in the western part of Denmark and the 35,000 are about to lose their hospital in the city as a larger regional hospital is being built. But after the completion of the 13,200 m2 star-shaped Center for Sundhed, the city is secured several basic healthcare functions within short reach. Using a star shape makes it possible to both include and divide (enabling differentiation in opening hours) several different health functions under one roof, which was one of the jury’s reasons for awarding the building and the architects aim from the beginning:

“The healthcare center acts as a junction both internally to the many different healthcare related functions but also externally to the city and region as a whole. We always aim to create architecture that makes a difference to the people working and visiting our buildings. One of our main focuses was to make the visitors feel welcome, both when they arrive and when they move around inside the building. Healing architecture is our signature and we are pleased to see it unfold in Holstebro,” says Birgitte Gade Ernst, Partner and Head of Business Area in Arkitema Architects.

By opening up the house towards the city the healthcare professionals working at the center are given a unique possibility to address their messages about diet, exercise and other healthcare related information’s to a broad audience. The aim to open up the house and reach out is also visible on the ground floor where the building is connected to the neighboring building, Gråkjær Arena, the city’s main sports arena, and their users are able to share the hot water pool of the Healthcare Centre

Aiming high
One of the things the jury applauded was the ambitions in the planning of the healthcare center: “The municipality’s high aim has given the opportunity to build a unifying and inviting healthcare center which is completed with high standards. The internal logistics are well-planned and clear and the central open space contributes to a clear and intuitive way-finding.”

The five-story building is planned with simple and effective means in a four-armed star. Arriving at the center you are greeted with open arms as the entrance is situated between two of the stars’ wide-spread arms. Entering the building you find yourself in the reception area which naturally leads you to the large central atrium from which it is easy to orientate yourself in the building. A central stairway is the main path between the five stories and on each floor the hallways radiate from the atrium, creating a natural flow between the buildings different functions.

During the development phase, the architects have focused on design solutions that apply to both visitors and everyday workers of the center. Therefore a task group containing citizens, local institutions and future employees took part in the design process, which has rubbed off on the architectural design. This is part of the reason that the building has been very well received by the local community.

Arkitemas project Mental Health Hospital in Skejby was also nominated for the award. 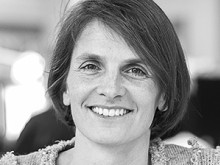 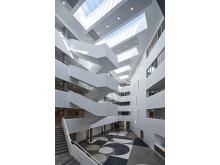 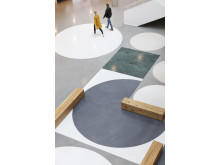 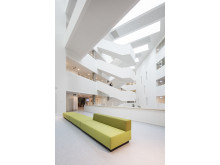 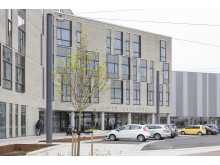 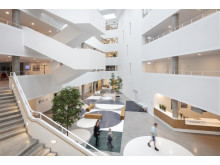 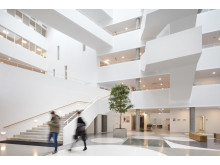 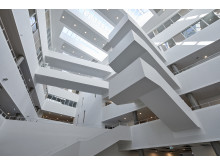 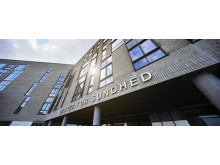